Travelled to Glasgow for the Gaelic Drama festival, held in the Lyric Theatre on May 16th 1959. John Morrison produced “A view of Matrimony” for the Shawbost club and took the leading part. 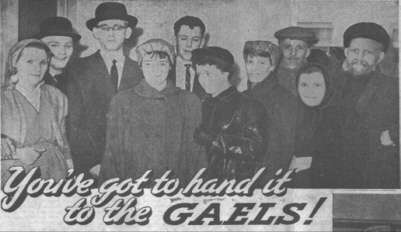 The year 1957 saw the Glasgow Gaelic Drama Association's first Gaelic Drama Festival. By 1959 it had stretched to seven competing drama groups, over two nights, including, for the first time, a drama team from the Western Isles - Comunn Cluiche Shiaboist (Shawbost Drama Club).

Inspired by the formation of the GGDA and under energetic and enthusiastic direction of John Morrison - Seonaidh Dhomhnaill Tharmoid - a group of local young people formed a drama club. Initially, short sketches were performed at local concerts and with that experience under their belts they moved into the "big time", deciding to enter for the Third Gaelic Drama Festival in Glasgow - no small undertaking for a large group of young folk over four decades ago. The transport of cast and props was no easy matter then.

Left:John Morrison (Shonnie Rob.) who translated the play
Right:an extract from the programme “An Treas Feis Dhrama” printed for 7th May 1959

The play they chose suited them to a T, as they say. The play "Rùn Pòsaidh" was a translation by Seonaidh Dhomhnaill Tharmoid of James Shaw Grant's comedy ''A View to Matrimony". In the play the island village of Cro-buidhe is populated by spinsters and bachelors and there hasn't been a wedding there for twenty years. There is consternation when the news leaks out that a man from Cro-buidhe has advertised for a wife. Suspicion is rife as to who it is.

James Shaw Grant's knowledge of Island characters was clear in the writing and, equally clear, during the performance, was their familiarity to the cast.

Who were they, this adventurous and talented band of young Thespians? Their names in English appear in the programme but that hardly identifies them. The names by which their fellow villagers knew them are as follows.

The last name on that list might surprise some folk. The reason was as follows. At virtually the last moment before they left on the Loch Seaforth, one of the cast had to withdraw. The part he was to play was the Missionary—a new Missionary was urgently required. A hurried phone call was made to me in Glasgow by Seonaidh. The call went something like this:

Somehow or other Seonaidh convinced me that all would be well - or at least he prevailed on me that it would be and I am very glad he did. It was great fun and the cast did themselves proud,

The well known SCDA adjudicator Bill March complimented the cast on how well they captured the feeling and comedy of the play. And this was clearly felt by the reaction of the audience also.

Seonaidh himself gave a virtuoso comedy performance, winning the Duncan MacRae Trophy for the Best Comedy Performance at the Festival.